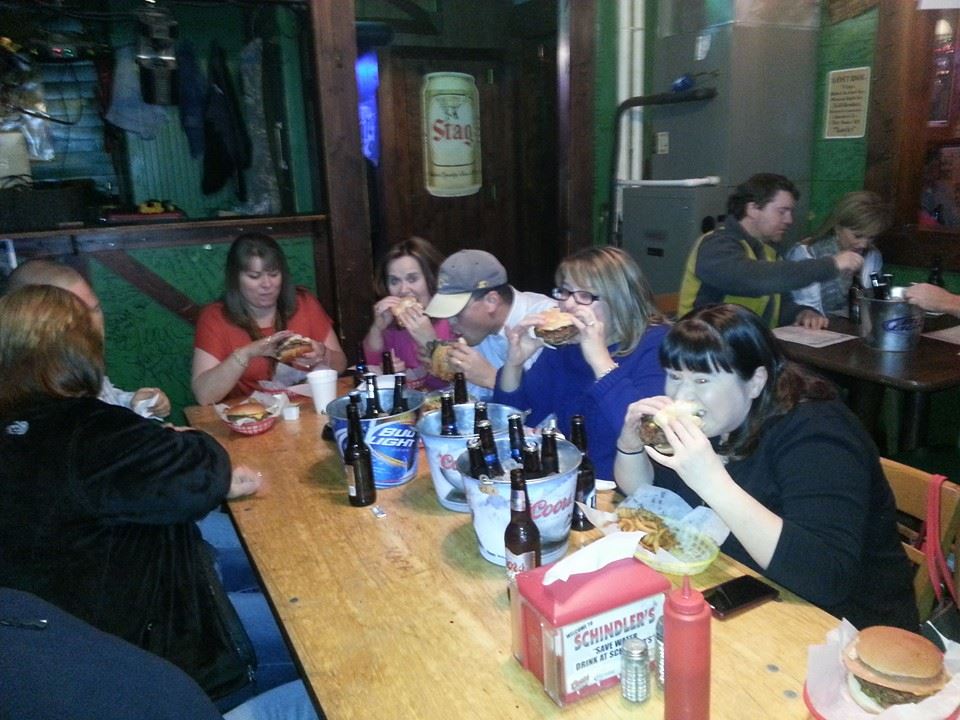 Sure, Why Not? Throw some Fried Pig on it!

When you think of the great “American Hamburger”, you usually think of toppings like cheese, tomato, onion, pickle, lettuce, and even Bacon.  But what about Bologna?

Granted I was a tad confused on why anyone would choose a slice of bologna over a few strips of bacon to put on a burger?? No way a piece of bologna is beating out 4 strips of bacon. But I guess if you think about it, they do both come from the pork family, so maybe there’s some reasoning behind this madness? Well Shindler’s Tavern in New Hamburg, MO seems to think so. They’ve been serving their burgers this way for decades. And by God it really works. People flock to Shindler’s from all over Southeast Missouri, just to get a bologna burger on a weekend afternoon. Personally, I never thought a nice greasy piece of fried bologna slapped on top of a hamburger would taste so damn good? But it did. And I was wrong.

The town of New Hamburg also had some very unique character itself. It is tucked away in the rolling hills of Southeast Missouri and very peaceful no matter which direction you turn. They don’t get much traffic in town, except for those passing through (I counted only one stop sign). They don’t have the crowded shops, long lines, busy stores, or anything you experience in the city on a daily basis. There is a beautiful Catholic Church a few doors down from the pub, and a general store across the street, but that’s about it. And, besides the small neighborhoods in the distance, and a few locals lingering around, you really feel like you are in the middle of no where. But it’s peaceful, so you don’t even care.

Bottom Line – Schindler’s is definitely worth a visit if you are any where near Benton, MO (or heading south on i55, around mile marker 80 in Southeast Missouri) just for their bologna burgers alone. Throw in a can of Stag beer, and a game of un-even billiards, and this makes a great day trip for anyone. And even though it is a ways off the beaten path, it’s worth the side step for sure. It’s been a staple in Southeast Missouri for many generations, and a place tourist should check out at least once, if given the opportunity.

USA Today, even mentioned Shindler’s as the go to burger joint in all of Missouri, in their “51 Great Burger Joints” story back in 2013.

From the article . . . “Others may claim to have the state’s best burger, but anyone who has visited Schindler’s Tavern in the hamlet of New Hamburg, southwest of Cape Girardeau, knows they are all full of baloney. Well, that’s not entirely accurate, since bologna is what makes Schindler’s burger the best. These handmade patties are topped with a slice of fried bologna and smothered with grilled onions. Want fries with that? How about a plate of onion-battered deep-fried green beans, instead?”