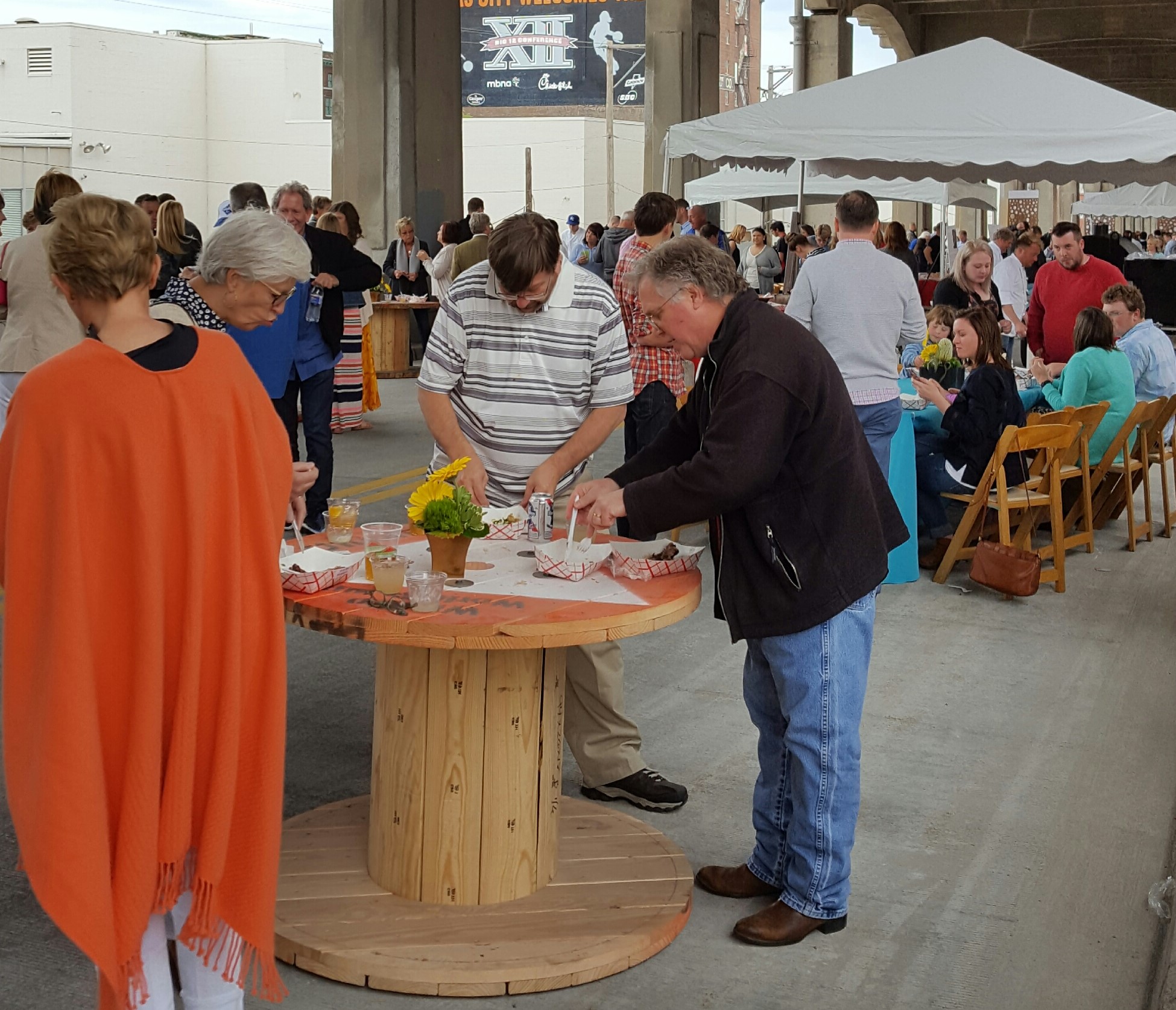 Cook for Courage- delicious food for a good cause!

I enter A LOT of contests- HGTV Dream House, Disney Sweepstakes, local giveaways, etc… and I rarely win. So to my surprise I got a call from Spaces Magazine telling me that I won two tickets to Cook for Courage this weekend. I was so excited. This prize was right up my alley.

Cook for Courage is in it’s 3rd year, benefitting the Child Protection Center, a non-profit group that fights against and promotes awareness of child abuse. The idea is easy- high-profile celebrity chefs and judges, coming together under the 12th Street Bridge in a barbecue cook-off to see who can prepare the best smoked ribs. Local chefs that I love making RIBS? Fantastic.

Bluestem and Rye’s Colby Garrelts, Laura Norris of Cucina della Ragazza, famed Alex Pope of Cleaver & Cork and Local Pig, Dan Swinney of Lidia’s, and John Smith, whose new restaurant will open later this year, faced off with smoked ribs for a good cause Sunday! Celebrity judges oversaw the event- judges, a list of notable local celebritites- Kansas City Chiefs’ quarterback Alex Smith, Tanner and Jade Tolbert from “Bachelor in Paradise,” Frank White, county executive and former player and coach for the Kansas City Royals; Miss Missouri 2015 McKensie Garber, Kansas City Chiefs tight ends coach Tom Melvin, and Katie Van Luchene and Kimberly Winter Stern of KSquared. No doubt that this was a fabulous fundraiser that will produce so much for a wonderful cause.

Back to the food. I am in shock that I was in such a “Top Chef” situation with wonderful chefs- James Beard nominees and winners. With my win, I got into the VIP party as well. The VIP Pre-Party featured appetizers by Bobby Stearns of Ophelia’s.  After the judging, dessert was provided by Heirloom Bakery and Hearth. (Sadly, we were so full after the tastings, I skipped dessert!) But the cookies, brownies and cakes from Heirloom looked delicious!

The food was fantastic. Each chef served their own rib and a side ranging from mac and cheese from Chef Smith to a warm potato and arugala salad from new-to-me Chef Norris of Cucina della Ragazza. Each chef also featured a signature cocktail by local favorite J. Rieger & Co Distillery. Boulevard and KC Wine Co. provided other refreshments.

We tried to pace ourselves, but thoroughly enjoyed something from each tent. John Smith introduced us to an “Alabama white BBQ sauce” and Chef Pope gave us a cheesy corn bread with some sort of tangy mustard. The ribs stole the show though and in the end, our vote went to old friend and brillant chef, Colby Garrelts with a mouth-watering rib and collard green and white bean side. The local pride in these chefs though made the competition light-hearted and fun and every chef offered something different and new.

Sadly, we were so full, we had to make an exit before the winner was announced- in our book, there was something winning from each chef.

Such a nice way to gather community for a good cause. The nonprofit organization sees close to 800 children a year in Jackson and Cass counties.

Thank you chefs for a great evening and giving your time to such a great #local cause!