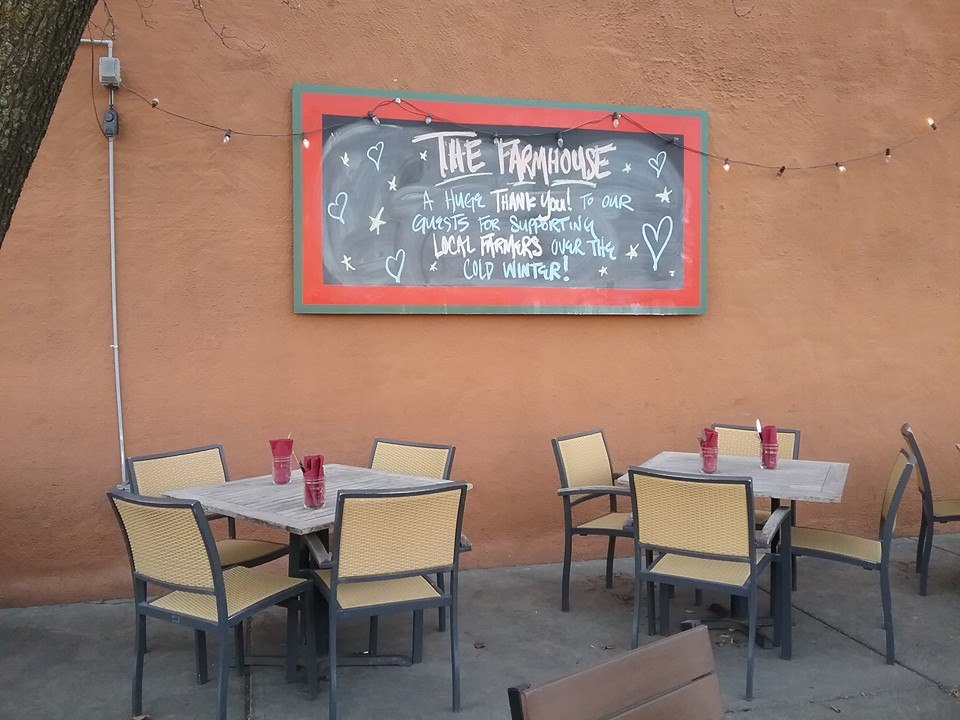 There was a lot going on last night. First Friday, Food Truck Friday, and the RideKC Streetcar  made it’s debut. We had the best intentions, my group was going to meet in the middle, two coming from Johnson County and two from the Northland. The two from Johnson County parked up by Crown Center and hopped onto the new streetcar. We, not knowing too much about the streetcar, dared to find a parking spot- even one closest enough to catch a ride. We failed. With all the hoopla, most parking lots, garages, streets were full and the block party was in full swing. After 40 minutes of circling what seemed like the entire downtown, we headed to the River Market to find a spot for a much needed drink.

A Night on the Patio

We decided on The Farmhouse, a very cool, yet quaint restaurant on the corner of Deleware. Ironically, there is a street car stop a few steps away. Convenient for our friends to join us after their brief stop at Anton’s. We were sat fairly quickly, on the patio, after about a 10 minute wait. Compared to the hustle and bustle of downtown, this was a HUGE relief. Relaxing and comfortable. The menu was simple, with fresh local ingredients highlighted. We started with a local artisan cheese tray that featured four cheeses- two soft, two hard with an apple marscepone to clean your pallate. My husband and I split- and each enjoyed with the side of homemade crackers. For dinner, two of us tried the Hanger and Fries and it was one of the best meals I have had in a long time. Tender steak cooked to order (medium) topped with a bleu cheese butter and salsa verde and seasoned- cut fries that made the meal(that, and the home-made ketchup on the side!)  There was a short-rib special that my sister enjoyed and my husband had the Roasted Brussel Sprout Salad with crispy ham and warm bacon dressing. Even someone who doesn’t care for brussel sprouts(me!) could like this salad- it was really good! We shared a flourless chocolate torte after diner and French pressed coffee. For drinks, The Farmhouse has a huge selection of local and national craft beers as well as an extensive wine by the bottle list- we simply chose The Farmhouse Red and White, which were delicious and generously poured, and the Farmhouse IPA, which is a local beer brewed by Crane Brewing Company in Raytown. Specialty drinks are also available.

Kansas native, Michael Foust, Executive Chef/Owner of The Farmhouse, opened this farm-to-table, tip-to-tail restaurant in July 2009. He moved to Aspen, CO where he worked as sous chef and was encouraged to enroll in Le Cordon Bleu College of Culinary Arts in Portland, Oregon. He continued his study of French culinary-technique cooking in Lyon, France. Recently, he has expanded his culinary talent by opening Red Wattle Food Truck and Little Piggy KC Food Truck Hub. His “Farm to Table, Tip to Tail” concept lets nothing go to waste- they use farmers from Kansas and Missouri and make their own bacon, lardons, chicharrones, broths, and stews in house. Their seasonal menus remain local, fresh, and creative.

We might have missed the events of downtown, but it was a perfect Friday evening with clean, fresh food, a relaxed setting, and good company. #EatLocal #SupportLocal #PromoteKC

A New Face for First Fridays! The Dusted Attic